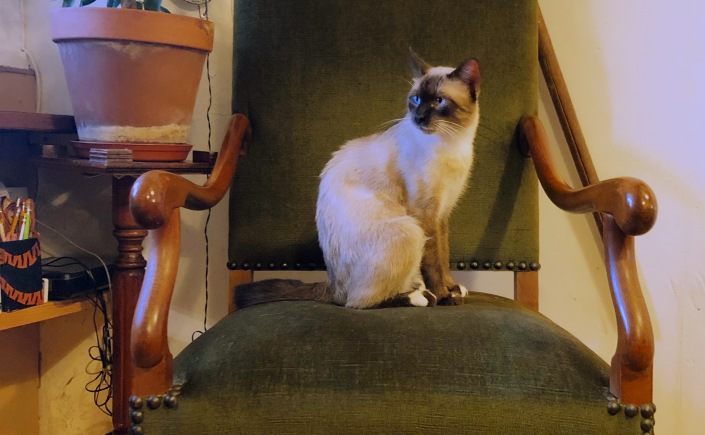 Recently, most of my days have been taken up with writing query letters to literary agents and tweaking Red Vienna, the first volume of Two Suitcases. I even added a short new section. Today Henri IV thought it was time to take a break from it.

Moving to the desktop worked for a short time.

But he was determined. I gave up.

And he decided to take a nap in the kitchen.

A short time later, while waking from a second nap on the kitchen counter, the idea to open his own Instagram account occurred to Henri. I reopened my laptop. He agreed to stay off the keyboard temporarily so we could choose some pictures to share to get it started.

But first he wanted to wash up.

And adjust a few things.

After that, we set up his new site, @henriquatredecordes. Naturally he wanted a simpler name, but some other Henri IVs had already claimed them. Thus, he is forced to go by most of his whole name, which is Henry IV de Cordes.

Satisfied with his day’s work, he sat on his throne to wait for dinner,

Quite a few of the queries I’m sending out to literary agents ask for a one sentence pitch for the book.

Which of these do you like the best? Do you have a better idea?

1. Can young love and a passionate commitment to high ideals survive the forces of fascism, populism and propaganda in Red Vienna on the eve of World War II?

2. In Red Vienna, idealistic young lovers Gisi and Max watch their dream city fall to the forces of fascism as the second world war looms

3. In Red Vienna, young idealists Gisi and Max fall in love at the 1929 International Socialist Youth Congress and set to work creating a more caring world, but can they hold onto their vision when their beloved utopia is destroyed by racism, nationalism and civil war?

4. With shocking parallels to recent events in the United States and Europe, this book – based on a true story – tells of an idealistic young couple confronting the forces of rising fascism and civil war in Vienna on the eve of World War II.

Thanks so much for your input.

As those of you who follow this blog know, Two Suitcases, my book project, grew to three volumes some time ago. There was just too much material. My plan was to break the characters’ journey into their years in Vienna, their years in Paris, and their years in the south of France.

Though it’s five years since I began the project, and much of that time I was working on the project with a sense of great urgency – I even dreamed that my mother was telling me “work faster!” once – I stopped for two years when Mama Ganache needed me. And then there was the move to France which caused further delay. In retrospect, though, I think the gaps improved the book. Sorry, Mom.

Recently, as I was researching and writing about the period leading to the 1934 February Uprising (or Austrian Civil War), the parallels to what’s happening in the United States now became unmistakable. I posted an excerpt last year about how Austria became a Fascist dictatorship when Englebert Dollfuss dissolved the parliament and adopted martial law.

I continued writing until I reached 1936, all the while following the news of Trump’s America. Then that sense of urgency returned, and it pushed me to change my plans. The first volume, Red Vienna, would end after the February Uprising. The period when the characters are forced underground in Vienna, 1934-38, would be the second volume, and their period in France, 1938-1940, will be the third.

At that point, I went back and revised and rewrote the first book, which is now called Red Vienna, to prepare it for publication. I’m pleased to say that I’ve begun the process of seeking representation for it.

My real reason for this blog, though, is that I read this morning that Michael Caputo, one of Trump’s toadies, was warning people of armed uprisings, and that sense of urgency returned. I’ve posted an excerpt from Red Vienna below. It was hard to choose a piece because the events happen over a period of years, but this one is a pretty pointed parallel. It takes place immediately after the uprising.

At four in the morning on February 18, Max Baum, stinking, hungry, and thirsty, furtively unlocked the door to his family’s apartment, slipped in, and immediately locked it behind him. He had climbed out of the sewer at Karl-Marx-Hof just two hours earlier, and managed to make his way home flattened against the walls of buildings, deep in the shadows, through the darkest alleys and streets of the city.

Leaving his mud-caked boots in the hall, he skirted past his sleeping father and went into the kitchen where he threw some bits of coal onto the embers in the stove, and drank down every drop of the boiled water left in the pot. Then he refilled the pot and set it on top of the stove again.

He shivered as he took off his clothes and put on his threadbare bathrobe. It would have been a good thing if he could have thrown those clothes away, but that was out of the question. Instead, he pulled the big galvanized tub out from under the sink and began to fill it, pot by pot, with water heated on the stove. As he waited for the water to heat up, he ate whatever he could find: some dry bread and most of a can of pickled herring. An hour later, when the tub was full enough, he stepped in, sighing deeply as the steaming water surrounded him and slowly warmed him. He washed himself thoroughly and then lay back and relaxed until the water was almost cold. Later, dry from the heat of the fire and wearing his nightshirt, he added another pot of boiling water to the washtub and dropped his filthy clothes into it.

It was after six in the morning when he lay down on the settee. He slept for the next twelve hours, barely stirring when his father came into the room and pulled a blanket over him.

After covering his son, Peppe left quietly to go to his cafe, where he found Dolf and Fredl sitting in a booth in the back room.

“I haven’t seen anything to make me think it’s not. But who knows anymore?” said Fredl. “They’re picking up more of us every day. We’re taking a big risk being here, but being at home could be an even bigger risk. Who knows anything anymore.”

“Max is back,” Peppe told them.

“At least he’s home. The news is all very bad.”

“Yes, Dollfuss is telling the world the housing complexes were built as fortresses to store weapons for an armed takeover, and that they stopped it from happening just in time,” Fredl said.

“And they’re putting out that we were in league with the Soviets,” finished Dolf.  “The headline on the Fatherland Front paper says ‘Armed Insurrection Averted.’

Fredl said, “They claim only two hundred died, but I’ve heard it’s in the thousands.”

“And they’re hanging more as we speak,” said Peppe.