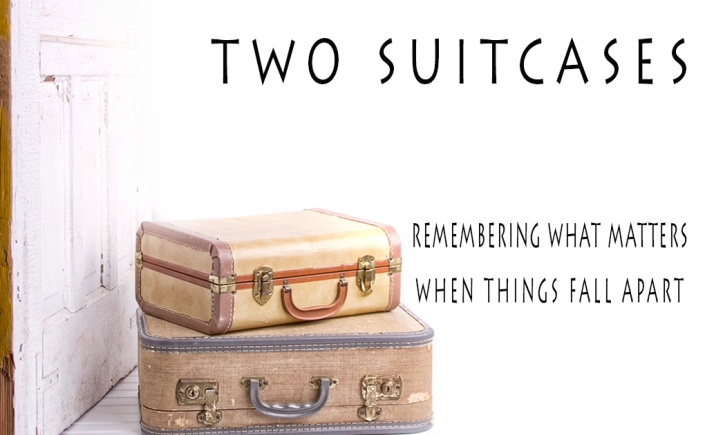 Today, even though I had most of the day to work on my new book, I only added a few lines and revised a short section. Instead, I worked on a crowd-sourcing site I’m planning to put up to help pay for the increasingly necessary research trip to the settings of the novel next spring. You can see the opening image of the site above. The day turned out to be more fun than I anticipated because, as incentives for people who are willing to support the project, I’m making and sending out pipe cleaner animals. Today I practiced making some to be sure I really could do what I’m promising. 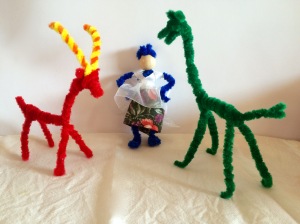 Some of you, I’m sure, are shaking your heads and asking, pipe cleaner animals? Here’s the reason. When I was a child, I had a collection of pipe cleaner animals made by one of the people in my parents’ circle. Unexpectedly, they turned up in Two Suitcases, playing a sort of Jiminy Cricket or Rosenkrantz and Guildenstern role. Here’s the beginning of the book in its current draft:

I lift the green pipe cleaner giraffe with the toothbrush neck from the shelf under the window and turn him toward the rising voices. “I doubt it,” he says. “Not anytime soon.”

The red antelope with wishbone horns snorts. Her attention is mostly absorbed in remaining upright. A powerful breeze rushes through the window, open an inch or so to mitigate the heat and cigarette smoke in the room. It hits the antelope’s oversized horns directly. She staggers but doesn’t topple.

“It won’t be over till after bedtime,” she says grumpily. “Once they start to shout, we should make ourselves comfortable.”

The blue pipe cleaner lady with the red plastic dress is upside down at the moment. The antelope is already packing their belongings—two acorn caps, a hard candy wrapped in foil and two carefully folded pieces of foil from candies eaten earlier—into her dress, which until recently topped a canister of whipped cream. They’d already chosen which of their things to leave behind and which to take. The ashtray is too heavy and they didn’t think they should touch the lovely china cigarette box. Anyway, they only have the lady’s whipped cream top dress to carry things in. Too bad the third acorn cap doesn’t fit. They’ll have to share plates at their next place, wherever that is.

“I’m so sorry I can’t help you with the packing,” the giraffe says. “But I’ve got a stiff neck.” He bobs the toothbrush to see if anybody gets the joke. “I’m very good at seeing over things, though.” Bravely, he hops up onto the windowsill and, bracing himself against the woodwork so as not to blow away, he peers out into the Brooklyn night. “It’s still raining, and the lights are on,” he reports. “Even in the park.”

I move all three of them to the bookshelf below the window and rearrange the pillows I took from the sofa on the floor around me. I am usually in bed by dark, but tonight I am in New York with my parents, visiting their friends. As always, I chose the most beautiful pillows, the ones with the multi-colored covers Fanny weaves. To my right, a heavy cast-iron radiator chuffs out heat relentlessly. I like sitting near the radiator, but the apartment is so warm, it makes me sleepy even when I don’t want to fall asleep.

Turning back toward the toys, my eye is caught by the bold, black calligraphy on the spine of one of the books. Die Sozialdemokratie und die Nationalitätenfrage it says, though at four, I couldn’t have read nor understood it even if it was in English: Social Democracy and the Nationality Question. There are a great number of beautiful books, some hand-printed and neatly bound with string. Some have pictures, black and white prints made from woodcuts. I’ve studied these closely. One picture fills a whole page. It’s a big tree with its trunk breaking in a thunderstorm. There are only four words on that page: O schwanken! O taumel! – my mother says they mean something like “Oh, sway! Oh, tremble!”

I’ve asked to hear the stories that go with the pictures, but everyone says I wouldn’t understand, so I make up my own stories to go with the pictures and look at the shapes of the words and letters. I especially like the books with the clean, tall, squared-off letters. The invitation to the evening’s gathering of my parents’ friends was hand-lettered in the same elegant style.

That’s as much as I’m willing to give away now, but to be honest, I’m not very good at keeping my own secrets, so more of the book is likely to show up here. In the meantime, watch for the crowd-sourcing site, which I hope to have in order within a week or two. This is so much fun! 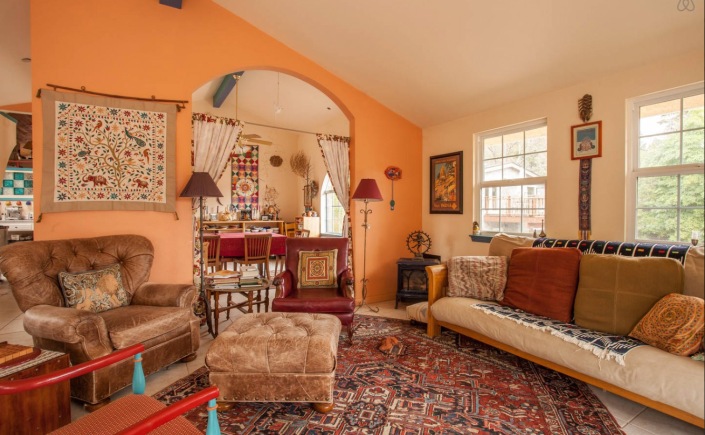 Tom and I are getting ready to sell our house next spring or summer.

We’ve been in San Luis Obispo for seventeen years, longer than we lived in Trumansburg, longer than Tom ever lived anywhere and pretty close to that for me. We’re not planning to leave San Luis, just this big house, which has been feeling more and more burdensome over the last year.

Here’s a short-lived glimpse into our home: this is one of my Airbnb listings. I’m taking all three listings down after Labor Day to give us time to get the house ready to be shown and to give me time to write. (The pictures on the Airbnb site were taken a year or so ago.)

I imagine us moving to a beautiful two or three bedroom place with enough room for Tom’s piano and for my new project, the work-in-progress that my next series of blogs will follow.

I’m working on a new book, historical fiction based on my parents’ story. I call it Two Suitcases because my parents left Vienna in 1938 with two suitcases, Paris in 1940 with two suitcases, and a village in the south of France in 1942 again with only two suitcases. It’s an extraordinary escape story, a re-examination of social democracy in the Red Vienna years, and an exploration of values. How do you choose what goes into two suitcases?

Nothing I’ve done for a long time has excited me as much as doing the research for the book and beginning to write it.

The story follows a group of friends and family who work for the Social Democratic Party in Vienna during the 1930’s and remain friends for the rest of their lives. 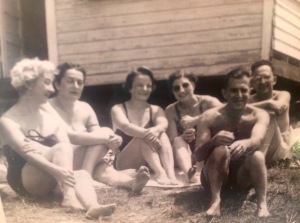 Here they are relaxing at a cabin in the Catskills right after the Second World War.

There are four main characters. 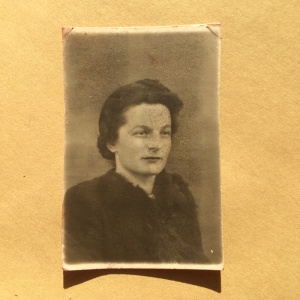 This is her passport picture from 1942 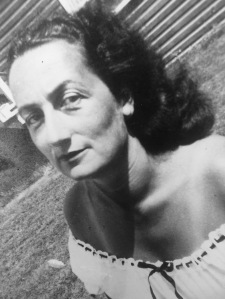 And my Uncle Eric, of whom I only have a picture taken many years later, in the 1970’s: 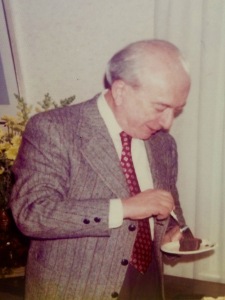 a gracious man with an elegance still evident when he was 93.

As I write, I’ll share snippets of the text here and reflect on my writing process. Stay in touch!