After nearly three weeks in the big cities of Morocco, Tom and I headed to the mountains.

Atlas Mountains from the road from Marrakech to Ourika

Tom had visited the Ourika Valley in the foothills of the Atlas Mountains before, so we booked a room at in Tnine, the village he’d visited with a souk where the Berbers came by donkey. We planned to see that on Monday, the day of the week it happens. We arrived on Friday.

Our hosts in Morocco have been very hospitable, but Abdurrahman at the Secret Atlas is by far the most generous and friendly of them all. Using a translator on his phone because he speaks only Arabic, he served us delicious thyme tea on our arrival, told us about his family, and shared beautiful passages from the Koran that explained his exceptional hospitality. For 11€/night, we have a spacious bedroom, living room and kitchen. The extraordinary breakfasts Abdurrahman cooks for us each morning are a few euros more. 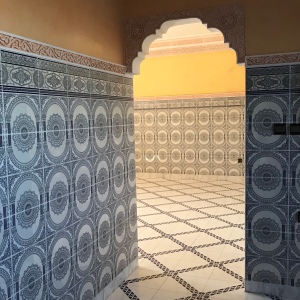 Tiles on the wall and floor of the Atlas Secret

The apartment is elegantly spare and spotless, the bed excellent, and views spectacular.

View from the Atlas Secret

We were a little surprised, however, to find that the Secret Atlas is in apartment building on the relatively busy street that connects the two parts of the village. On Airbnb, it’s listed as a “farm stay.”

On our first afternoon in Tnine, we explored the part of the village near the river. It was hot, the pollution from all the cars and motorcycles hung low, and other than offering a window into the lives of ordinary residents of the valley, there wasn’t much to see there.

The next morning, we discovered that other than a couple nice places for tea or a meal, the other end of the village had little to offer either.

We looked on the internet to see what else we could do. Everything looked like it would require another expensive taxi ride. The taxis to and from Marrakech are a bargain because they’re shared by up to seven people, but to call one to go from point A to point B requires paying the fee for the distance traveled to where you are and to where you’re going at the full rate.

But wait. It looked like at least one destination was close by, and it was something neither of us had ever seen: a saffron farm!

Le Jardin du Safran is an easy walk from the Secret Atlas. We’d passed by the dirt road that leads to it the day before.

What an enchanted place! We found the front gate open.

A sign told us we were free to wander around but not to pick the fruit or flowers. Pretty soon the farm manager found us and took us on a tour that lasted a couple hours.

Synchronistically, we’d arrived the day before the four best and busiest days of the year: the saffron harvest. Every year, from November 4 – 8, when the flowers of the crocus sativa bloom, dozens of local women are hired to do the delicate work of pulling the bright red pistils out of the flowers, nipping off the yellow end with their fingernails just so, to produce the tiny strands of highly aromatic spice so highly valued throughout the Mediterranean, and the world. 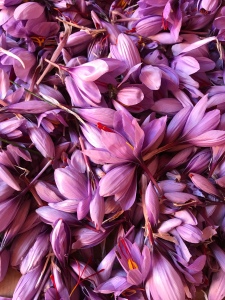 Crocus flowers harvested the morning of our visit 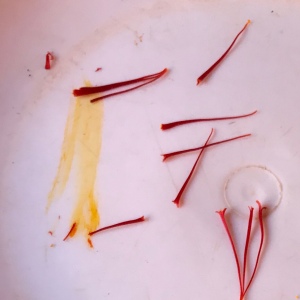 Instead of watching the women at work, we sat down on the stools around one of the round tables and learned how to pull the pistils out of the flowers ourselves! Then we saw the drying process and smelled the exquisitely freshly dried product.

The second part of the tour was a leisurely walk through the farm, where a wide array of other herbs are grown, and trees: olive, walnut, persimmon, pomegranate, date, apple, and argan for oil, all arranged around small square plots in which the crocus bulbs were planted. The day’s harvest was already picked, but a few flowers were left for the tourists. 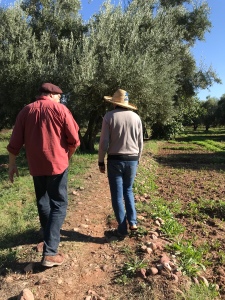 Tom and our guide

There were also goats and donkeys.

Tomorrow we’ll visit another local farm, one that calls itself the bio-aromatique, organic-aromatic, farm. After today’s surprise, I can’t wait.

I guess it’s a farm stay after all!