My desk is filled with photos my parents and their friends in the 1920’s through the 1940’s. None of the main characters in my historical fiction novel-in-progress, Two Suitcases, is alive.

I should have asked more questions. 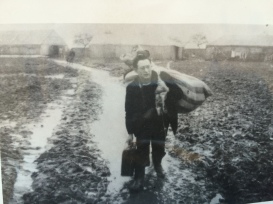 I write from pictures, from old newspaper articles and newsreels, from family stories told many times or just once, from snatches of memory, from dreams. I read about the period and places where the story is set incessantly. Then I make up stories that could have happened. 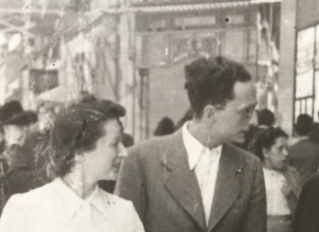 There are four main characters in

the story: my mother and father, Trude and Fritz, my father’s sister, Ida, and a friend of the family, Eric. Six more characters play secondary roles. None of these are entirely fictional, but what they do in the novel is certainly not what they did in life. It’s fiction.

Sometimes I wonder if they approve.

I had the great fortune to be with both my parents when they died, and I was close to my aunt till the end, but until yesterday, I thought Eric died about eight years ago and no one knew to contact me.

In yesterday’s mail I found a beautiful handwritten note.

“Eric passed away October 3, a few weeks before his 102nd birthday. He was in good health and excellent spirits. He died peacefully at home. His heart stopped while he was reading the Wall Street Journal.”

I said good-bye to Eric in 2008 on my way home from India. I already lived in California then and came east very rarely. Eric was his usual gracious and elegant self. It was five years after my mother died, and he told me for the first time how he’d loved her. At 95, he was still walking long distances every day, but we talked about the likelihood that this would be our last meeting. He filled my rental car with treasures from his beautiful house and we stood in the driveway a long time saying good-bye.

Caught up in the hurly burly of home, I didn’t write a thank you note for some months. When I did, it came back stamped “unknown.” I mourned.

I should have asked more questions.

Still, over these last couple months, the character, Eric, has been pressuring me to give him a more and more important role in the story. He’s been developing more personality, more, in fact, than any of the others, save Ida, and that perhaps because she acts as a foil to him. His voice is clearest.

If that note isn’t a wink, I don’t know what is.

7 thoughts on “Two Suitcases: a wink from Eric”